A FREE FILM AND A KINKY COMEDY – CINEMA NAIRN: THE SEQUEL!

Cinema Nairn, the community group reviving big screen films in the seaside town, are pulling back the velvet curtain to reveal a surprising sequel to November’s successful launch.

On Friday 8th January two movies will be screened – one of which will be totally free, as a way of saying thank you to the support received so far and to encourage even more people to take an interest in the project.

The venue will once more be Nairn Community Centre. 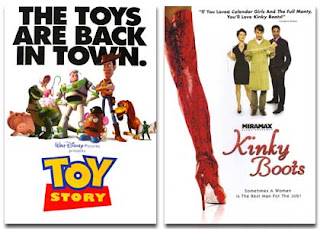 At 6.00pm families frazzled from Christmas and New Year and fretting about the return to school will be able to unwind with a big screen showing of “Toy Story” (rated U), the groundbreaking 1995 comedy that was the first feature film to use only computer animation.

The event is completely free with seats allocated on a first come first served basis. Doors will open at 5.30pm

Then at 8.00pm there will be a screening of the 2005 British comedy “Kinky Boots” (rated 12A), which has developed something of a cult following.
The film is based on a true story involving a dreamer from a small town who strikes it lucky in the boot business thanks to some rather exotic inspiration.

It has been described as 'Priscilla, Queen of the Desert' meets 'The Full Monty', full of stand-out performances and charming characters, and is guaranteed to banish the winter blues.

Tickets, priced £4.00 (£3.00 concessions), will be available from the Community Centre, Nairn Bookshop and iolaire photo:graphics (at the railway station).
Posted by CINEMA NAIRN at 23:19 No comments:

Thank you to all our supporters.

The three films chosen to kick of Cinema Nairn seemed to prove popular with a sizeable crowd attending each screening - about 130 people in total for the three films. "I Know Where I'm Going" proved the most popular (as predicted by our poll) with 61 people in attendance.

We were left hundreds of comments/suggestions and a few additional volunteers made themselves known, so once we have sifted through the notes and decided what to show/do next we will make announcements here and in the press.

Meanwhile we understand that we will be featuring on "Reporting Scotland" tonight (Monday 30th November) as some filming was carried out by the BBC at yesterdays event.
Posted by CINEMA NAIRN at 09:37 8 comments:

All three ticket outlets report steady sales of tickets for all three films due to be screened this Sunday (29th November) at the Nairn Community Centre. "I Know Where I'm Going" seems to be the favourite on our poll and ticket sales seem to bear this out. Don't miss your chance to influence any future screenings in Nairn by coming to a show and letting know what you want to see next.

Remember our prices are about half of the local flea-pits (Adults £4.00/Kids/Concessions £3.00) and we don't carry advertising or flog overpriced junk food!!

You know it makes sense...
Posted by CINEMA NAIRN at 22:17 No comments:

Original 1960 trailer for "The Magnificent Seven" 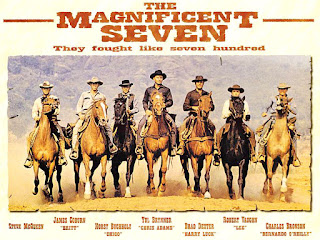 Posted by CINEMA NAIRN at 22:16 No comments:

Things seem to be hotting up with press coverage all over the place (except Nairnshire) first the BBC with:

Oscar-winning actress Tilda Swinton has been the inspiration behind a new group's bid to reopen the first cinema in a Highlands town since the 1970s. The actress co-organised two film festivals that have featured in Nairn in the past two years. She also has a home in the town. Cinema Nairn said her events suggested there was local demand for a new venue. More of this story here


Then the Press & Journal: 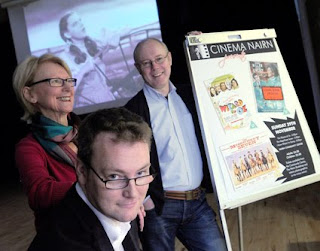 Moves have started to bring cinema back to Nairn after an absence of 30 years.The Highland seaside town, famed as the holiday resort of early movie star Charlie Chaplin and home to Oscar winner Tilda Swinton, hasn’t had a cinema since the 1970s when the Playhouse projected its final reel and closed its doors before eventually reopening as the British Legion and then Nairn County Social Club.

Picture courtesy of the Press and Journal

Then The Scotsman picks up the tale with:

The seaside town of Nairn is famed as the favourite resort of Charlie Chaplin and the current home of Oscar winner Tilda Swinton. But despite its cinematic pedigree, the town has suffered an intermission of more than 30 years without a vital element – a cinema.In the 1970s, queues gathered at Nairn's picture house to see Grease before the John Travolta blockbuster was screened in Inverness, 16 miles away.

And Hi-Arts give us some coverage on their website with the following:

Cowboys, Kilts and a Wizard Idea
Cinema set to return to Nairn after 30 years

Over the last two summers Nairn has had a starring role in the Ballerina Ballroom Cinema of Dreams and Pilgrimage film festivals, and it’s clear to local movie buffs there is a demand for regular screenings.

The Herald took this line...

Tilda’s film town may get its own cinema

The Highland town used by the actress Tilda Swinton as the base for her film ­festivals could get a cinema for the first time in three decades.

Film fans in Nairn, which is also famous as Charlie Chaplin’s holiday resort, have been without a permanent venue since the Playhouse projected its final reel in the 1970s. After closing its doors, it eventually re-opened as the British Legion, then Nairn County Social Club.

Now there are moves afoot to bring the big screen back to the town on the shores of the Moray Firth. Over the past two summers, Nairn has had a starring role in Swinton’s Ballerina Ballroom Cinema of Dreams and Pilgrimage film festivals, and local movie buffs say there is a clear demand for regular screenings.

More on this story here
Posted by CINEMA NAIRN at 12:43 8 comments:

We are offering three classic films being shown in Nairn Community Centre to launch Cinema Nairn.

Most youngsters who’ve seen The Wizard of Oz will have seen it at home – a big screen projection in a cinema full of other excited kids will be quite a different experience! It’s 70 years old this year but remains a real feat of film-making.

Westerns represent cinema’s hey-day for a lot of people and The Magnificent Seven is the daddy of them all with brilliant performances from the likes of Steve McQueen and stirring music by Elmer Bernstein.

A jewel of British film-making from Powell and Pressburger, set in the Highlands and combining romance, suspense, comedy and a dash of the supernatural.

Hopefully something to suit most peoples tastes. 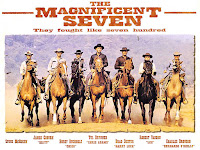 COWBOYS, KILTS AND A WIZARD IDEA – CINEMA SET TO RETURN TO NAIRN AFTER 30 YEARS

Moves are afoot to bring the movies back to Nairn. The Highland seaside town, famed as the holiday resort of Charlie Chaplin and home to Oscar winner, Tilda Swinton, hasn’t had a cinema since the 1970s when the Playhouse projected its final reel and became a bingo hall.

Over the last two summers Nairn has had a starring role in the Cinema of Dreams and Pilgrimage film festivals, and it’s clear to local movie buffs there is a demand for regular screenings.

A group of local enthusiasts calling themselves ‘Cinema Nairn’ have arranged for a day of classic movies to be shown on the big screen at the community centre on Sunday 29th November to gather reaction and, it is hoped, begin the revival of silver screen entertainment in the town...
Posted by CINEMA NAIRN at 11:34 No comments: