The latest season of films from Cinema Nairn, the community group behind the revival of big screen entertainment in the seaside town, includes a celebration of life during wartime in a rural community and a documentary for music fans bereft at the lack of a jazz festival this summer.

For starters, youngsters and parents nearing the end of the summer holidays are invited to relax with the help of Jacques Tati, the legendary French slapstick comedian and director.

His debut film, ‘Jour de Fete’, from 1948 will be screened on 11 August at 2.00pm with a special under-18 ticket price of only £2.00 Hilarity is guaranteed as the town prepares for its annual gala day. One reviewer said of Tati: “He makes cycling along a tranquil country lane as spellbinding as if it were taking place on a high wire.”

August is normally the month of the Nairn International Jazz Festival but the event is taking a break this year. To ensure jazz fans get their fix Cinema Nairn is pleased to present ‘Let’s Get Lost’, the acclaimed documentary about trumpeter Chet Baker, on 27 August at 7.30pm.

Jason Rose of Cinema Nairn said: “Let’s Get Lost will be a big attraction for any music fan and indeed anyone intrigued by the Chet Baker story. He went from heartthrob to toothless addict almost overnight. The film’s director, Bruce Weber, has created not just a documentary but a piece of art. The way the images and music blend is astonishing and I can‘t wait to see it on the big screen.”

WARTIME LIFE IN A RURAL COMMUNITY

This summer marks the 70th anniversary of the Battle of Britain and Cinema Nairn wanted to mark the efforts of those who served during the Second World War. ‘A Canterbury Tale’, which brilliantly recounts wartime life in a rural community, will be screened at 2.00pm on 13 September with tickets reduced to just £2.00

Sue Halliday of Cinema Nairn said: “We wanted to put on a film for an older audience in Nairn and rather than the obvious war movies we’ve gone for a beautiful story that focuses on those who were left behind and kept the country going. The film is open to all and the timing ensures members of Nairn’s lunch clubs can easily attend.”

A Canterbury Tale was directed and produced by Powell and Pressburger, who created such film gems as A Matter of Life and Death and I Know Where I’m Going.

Following the film complimentary tea and home baking will be served.

This year marks the 40th anniversary of The Railway Children and to help introduce this timeless and magical movie to the next generation Cinema Nairn has booked it for an early evening family-friendly screening on 1 October starting at 5.30pm.

As well as showing classics and forgotten gems Cinema Nairn is keen to screen recent releases, particularly those which some film fans miss on their mainstream release. The Hurt Locker, which earlier this year picked up six Oscars, will be shown on 29 October at 7.30pm. This thrilling account of a bomb disposal squad in Iraq was described by one reviewer as the most interesting, tense and suspenseful action film in years.

November’s film has a suitably wintry theme - Snow Falling on Cedars. This 1999 film was nominated for an Oscar and is one of the most atmospheric murder mysteries of recent years. It will be shown at 7.30pm on 20 November.

To decide which comedy fills the pre-Christmas slot on 17 December Cinema Nairn Fans will be invited to cast a vote. Details will be announced in the autumn.

And to round off the year there will be another screening aimed at families and younger film fans - The Pink Panther on Saturday 18 December at 2.00pm with under-18 tickets again reduced to just £2.00 This is the original (and best) outing from 1963 for gaffe-prone Inspector Clouseau.

More information about Cinema Nairn can be found on line at www.cinemanairn.blogspot.com. All screenings take place at Nairn Community Centre. Tickets are normally priced at £4.00 (£3.00 for under 18s) and before the 7.30pm films a bar is available from 7.00pm

The next film is Looking for Eric this Friday (30 July) at 7.30pm. Directed by Ken Loach it tells the touching and funny story of a postie in a crisis who gets advice from none other than French footballer Eric Cantona.
Posted by CINEMA NAIRN at 21:37 No comments:

In a slight change to our programme we will now be screening 'Jour De Fete' instead of 'Mon Oncle' both Jacques Tati classics, the replacement is of a shorter running time which we feel might suit younger viewers.
Posted by CINEMA NAIRN at 11:49 No comments:

(Anyone) Looking For Eric? 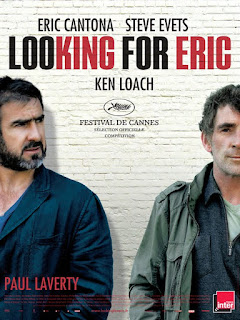 The final film presented by Cinema Nairn before the next season of screenings (take a look at the calendar above) is the 2009 Ken Loach movie "Looking For Eric" on Friday 30th July.


The plot revolves around a football fanatic postman whose life is descending into crisis. Looking after his granddaughter is bringing him into contact with his ex-wife, and his stepson is hoarding a gun for a local gangster.


At his weakest moments, when he considers suicide, his hallucinations bring forth visits from his footballing hero, the famously philosophical Eric Cantona.

Posted by CINEMA NAIRN at 11:13 No comments: