Next Film "The Smallest Show On Earth" - Friday 29th July

(Bill) Travers and (Virginia) McKenna play Matt and Jean, a young couple (they were married in real life) with a longing to visit exotic places, such as Samarkand. One day, Matt inherits a cinema from his great-uncle. When they look over their new property, they first mistake the modern 'Grand' for it. They are soon disillusioned to learn that the movie theatre they actually own is the old decrepit Bijou (nicknamed the "flea pit"), which is located next to a railway bridge. Along with the theatre, come three long-time employees: Mrs. Fazackalee (Rutherford), the cashier and bookkeeper, Mr. Quill (Sellers), the projectionist, and Old Tom (Miles) the janitor, doorkeeper and usher. 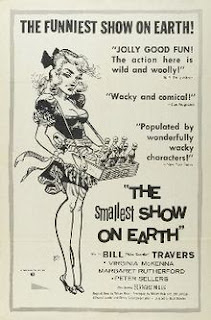 Robin (Phillips), their solicitor, informs them that the Grand's owner, Mr. Hardcastle (De Wolff), had offered to buy the Bijou from Matt's great-uncle for five thousand pounds in order to construct a car park for his nearby cinema. When they see their competitor however, he only offers them five hundred, thinking they have no choice but to accept.
Instead, on Robin's advice, they pretend to want to reopen the Bijou in order to force Hardcastle to raise his offer. At first, they seem to be succeeding, but then Old Tom inadvertently lets slip their overheard plan and Hardcastle refuses to budge. They decide to carry on with their bluff and go through with the opening. After a few mishaps, the business flourishes, especially after Matt hires the curvaceous Marlene Hogg (Cunningham) to sell ice creams and other treats at the interval.
Hardcastle counters by slipping a bottle of whisky into the next shipment of film reels for Quill, who has a drinking problem. He eventually succumbs to the temptation (while parched actors crawl across a desert on the screen), leaving Matt to try unsuccessfully to substitute for him; they are forced to refund the customers' money. Matt and Jean are ready to give up (with Old Tom eavesdropping again) only to wake up the next morning to find that the Grand has burned down. Hardcastle is forced to pay ten thousand pounds for the Bijou in order to stay in business while his theatre is being rebuilt. As an added condition, he has to keep the three staff on as employees.
Just as Matt and Jean are leaving on the train, Old Tom tells Matt that "It were the only way, weren't it?" implying he committed arson. Alarmed, they decide to write him a letter asking him to clarify his remark, but instead send him a postcard... from Samarkand.
From Wikipedia
Posted by CINEMA NAIRN at 23:06 No comments:

Review of "The Illusionist" our next screening

Follow this link to read a Review of "The Illusionist" a charming, funny animated tale about an unemployed French magician who sets off on a life enhancing journey around Scotland. A real treat for cinema lovers in Nairn. All ages welcome...

Review of "The Illusionist"
Posted by CINEMA NAIRN at 09:47 No comments: