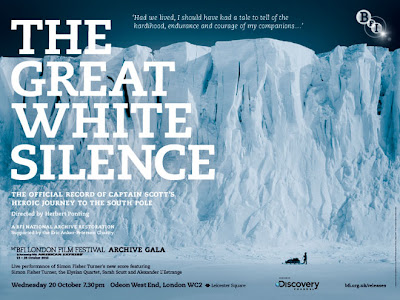 Originally released in 1924, Herbert G Ponting's documentary charted Captain Scott's ill-fated expedition to the South Pole. Ponting only accompanied the team as far as the Antarctic coastline base camp, but this was enough to capture sights never before captured on film, as well as a solid historical account of a legendary feat. The rest of the expedition is portrayed using his eerie and poignant footage of Scott, Oates, et al 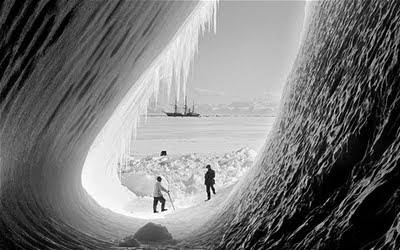 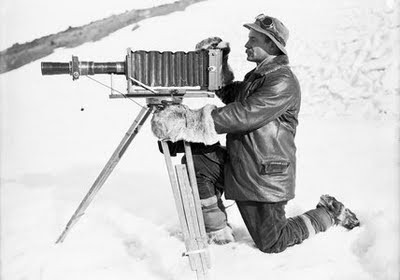 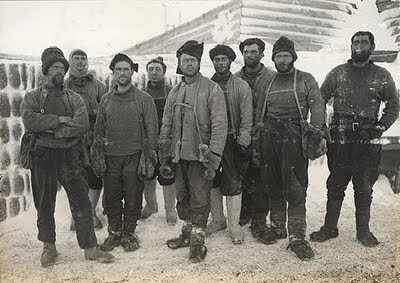 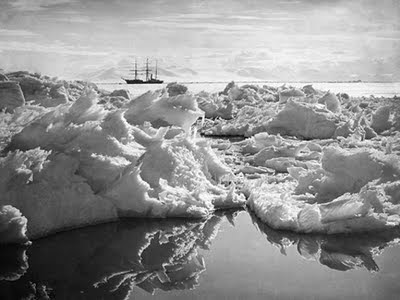 Posted by CINEMA NAIRN at 15:25 No comments:

Announcing the second part of our 2012 programme... 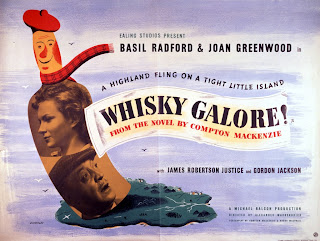 Friday July 27th  7.30pm Whisky Galore 1949  (82mins) Cert U
Based on a true story.  The real ship that sank was SS Politician. Having left Liverpool two days earlier, heading for Jamaica, it sank off Eriskay carrying 250,000 bottles of whisky. 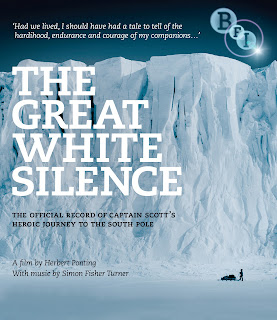 Friday 23rd November 7.30pm The Great White Silence 2011  (72mins) Cert U
This stunning documentary is the remastered version of the 1933 Herbert Ponting film of Captain Scott ‘s heroic journey to the South Pole.

Monday 3rd December 2.00pm Miracle on 34th Street 1947 (96mins) Cert U Seniors Special
When a nice old man who claims to be Santa Claus is institutionalized as insane, a young lawyer decides to defend him by arguing in court that he is the real thing.

Note: during evening shows there is a bar facility from 7.00pm

Seniors Specials  tickets cost £2.50 including tea and bakes.
Other screenings unless indicated tickets cost   £5 .00 Adult/£3.00 Under 18s - All welcome

Admission in accordance with BBFC certification guidelines. Dates and programme may be subject to change due to circumstances beyond our control.
Posted by CINEMA NAIRN at 14:28 No comments:

ScotMid who run the convenience store near the junction of Lochloy Road and the A96 have kindly agreed to sponsor some of our  "Seniors Specials" and a representative, Laura Paterson came up to Nairn to meet some of us and one of our 'Fans" (and a few familiar faces too) we made the most of the photo opportunity outside the Nairn Community & Arts Centre (our regular venue).... 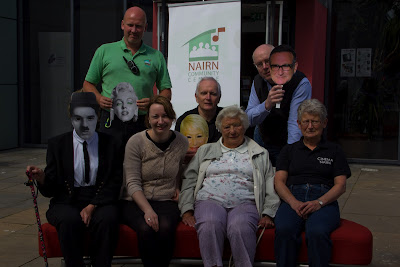 Posted by CINEMA NAIRN at 22:45 No comments:


Made in Dagenham is a 2010 British film directed by Nigel Cole. The film stars Sally Hawkins, Miranda Richardson, Rosamund Pike and Jaime Winstone. It dramatises the Ford sewing machinists strike of 1968 that aimed for equal pay for women. The film's theme song, with lyrics by Billy Bragg, is performed by Sandie Shaw, herself a former Dagenham Ford clerk. 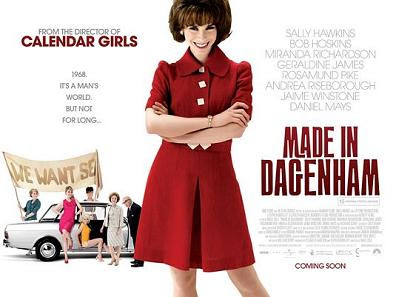 In 1968, the Ford auto factory in Dagenham was one of the largest single private employers in the United Kingdom. In addition to the thousands of male employees, there are also 187 underpaid women machinists who primarily assemble the car seat upholstery in poor working conditions. Dissatisfied, the women, represented by the shop steward and Rita O'Grady, work with union rep Albert Passingham for a better deal.

However, Rita learns that there is a larger issue in this dispute considering that women are paid an appalling fraction of the men's wages for the same work across the board on the sole basis of their sex. Refusing to tolerate this inequality any longer, O'Grady leads a strike by her fellow machinists for equal pay for equal work. What follows would test the patience of all involved in a grinding labour and political struggle that ultimately would advance the cause of women's rights around the world.

After the success of "Moon" we are pleased to offer Duncan Jones' second film at Cinema Nairn.

Colter Stevens, a US Army helicopter pilot whose last memory is flying in Afghanistan, wakes up on a commuter train. However, he discovers that he has assumed the identity of another man. 8 minutes later, the train explodes and Stevens finds himself in some kind of pod. He then talks to someone named Goodwin, who tells him he has to go back and find out who the bomber is. 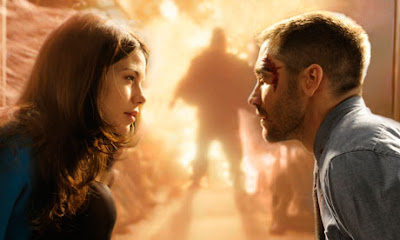 He is sent back to go through the whole thing again and attempts to find who the bomber is but fails. The bomb goes off and Stevens finds himself in the pod again. He is sent back another time, yet still cannot find out anything. When he returns, he asks what is going on. Goodwin and Rutledge, the scientist in charge, tell him that he is part of a project that can put someone in another person's consciousness during the last 8 minutes of their life. Stevens then asks why he cannot just stop the bomb. He is told that...

Altered minds, altered states and bags of style – this sci-fi thriller is a superb follow-up for Duncan Jones The Guardian ***** 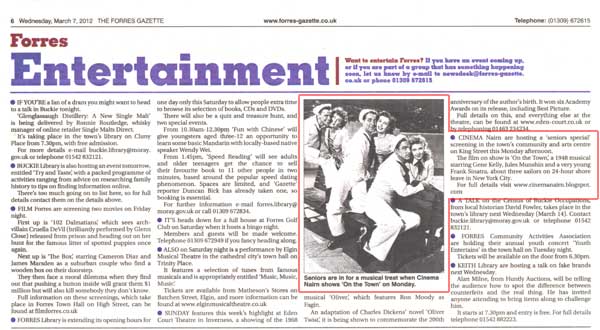 Spotted in The Forres (and Nairn) Gazette a nice mention for Monday's Cinema Nairn Seniors Special which is being screened in Nairn Community & Arts Centre at 2.00pm all tickets £2.50 which includes tea and baking...

Three sailors - Gabey, Chip and Ozzie - let loose on a 24-hour pass in New York and the Big Apple will never be the same! Gabey falls head over heels for "Miss Turnstiles of the Month" (he thinks she's a high society deb when she's really a 'cooch dancer at Coney Island); innocent Chip gets highjacked (literally) by a lady cab driver; and Ozzie becomes the object of interest of a gorgeous anthropologist who thinks he's the perfect example of a "prehistoric man". Wonderful music and terrific shots of New York at its best.

Posted by CINEMA NAIRN at 15:41 No comments:

If you enjoyed "You've Been Trumped" then our next offering may wet your whistle (sic). 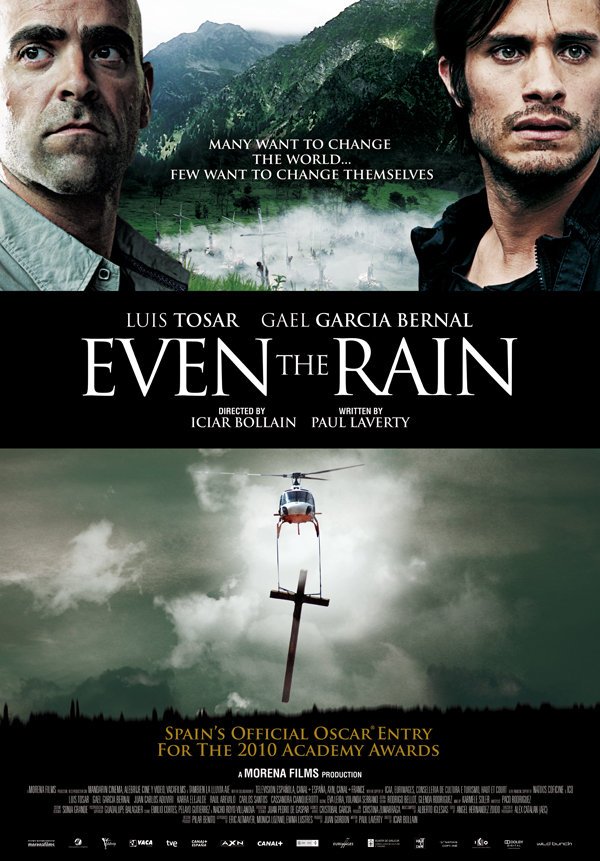 Spanish director Sebastián, his executive producer Costa and all his crew are in Bolivia, in the Cochabamba area, to shoot a motion picture about Christopher Columbus, his first explorations and the way the Spaniards treated the Indians at the time. Costa has chosen this place because the budget of the film is tight and here he can hire supernumeraries, local actors and extras on the cheap. Things go more or less smoothly until a conflict erupts over the privatization of the water supply. The trouble is that one of the local actors, is a leading activist in the protest movement.


Being screened in The Little Theatre, King Street, Nairn at 7.30pm

Posted by CINEMA NAIRN at 20:55 No comments:

Our AGM will be held on Monday 20th February at 8.15pm in the Conference Room of Nairn Community & Arts Centre. There will be a short cinematic treat in store for all those who attend...

Here's a clue but the photo is not from the film!

Posted by CINEMA NAIRN at 21:29 No comments: 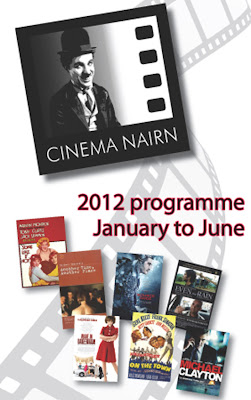 Announcing our varied programme of planned film screenings in Nairn up until June...

Friday 27th January 7.30pm  Some Like It Hot 1959 (PG) 115 mins  Classic romp where Tony Curtis and Jack Lemmon are two musicians escaping ‘The Mob’ by joining an all female band led by Marilyn Munro.

Monday 27th February 7.30pm in the Little Theatre*  Take One Action Film Festival Even the Rain 2010 (15) Spain (Subtitled) 103 mins  + discussion afterwardsSpain conquered the New World for gold… 500 years on water is gold.  As a director and his  crew shoot a controversial movie about Columbus, local people rise up against plans to privatise the water supply.

Friday 30th  March  7.30pm  Source Code  2011 (12A) 93mins   Jake Gyllenhaal and Michelle Monaghan star in this new Duncan Jones thriller, where a soldier wakes up in another body and discovers he is on a mission to find a train bomber.

Note: during evening shows there is a bar facility from 7.00pm

Admission will be in accordance with BBFC certification guidelines

*No bar at this event   NB: Dates/programme subject to change

Posted by CINEMA NAIRN at 20:05 No comments: